Login to Complete an Application or to Access Judging Panel 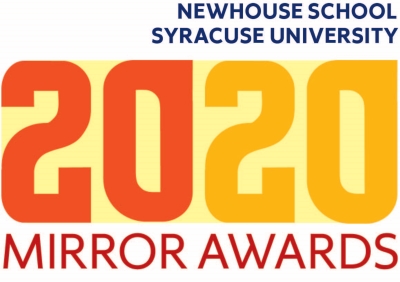 Now in their fourteenth year, the Mirror Awards recognize the best reporting, analysis and commentary covering the media industry and its role in our economy, culture and democracy. Established by Syracuse University’s S.I. Newhouse School of Public Communications in 2006, the awards honor the reporters, producers, editors and teams of writers who hold a mirror to their own industry for the public’s benefit.

The Mirror Awards are open to anyone who conducts professional reporting, commentary or criticism of the media industry—television, newspaper, magazine, radio, advertising, public relations, the Internet and other forms of content-rich digital communications.

The subject matter of entries should focus on the business, people, processes and regulation involved in the development or distribution of news and entertainment content. Television reviews, film reviews, fictional works and books are not eligible.

All entries will be subject to a two-tiered judging process. The preliminary jury is composed of media professionals and faculty from the Newhouse School. The top three to seven entries will be forwarded for final judging by a distinguished panel of journalists and academic leaders. Care will be taken to avoid conflicts of interest.

Entries will be evaluated based on three criteria:

Announcement of Finalists and Winners

A list of finalists in each category will be released in the spring. Winners will be announced at the awards ceremony, held in June in New York City

CLICK HERE TO CONTINUE TO CATEGORIES AND SUBMIT AN ENTRY